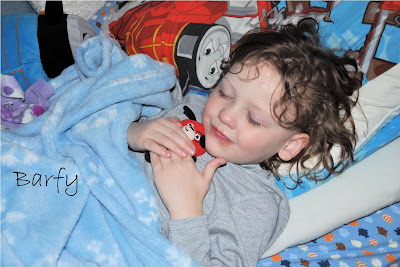 The kids are always exhausted on Thursday nights because they dance until 7:30 and we don't get home until around 7:50-ish. They are usually in bed with lights out by that time any other night! Tonight I told Bradley to go to his bed, then went to go get Chloe's medicine and when I came back to tuck him in he was already sound asleep. Doesn't he look like an angel? All sweet, innocent, and happy to be cuddling his lovey dog.

That little red dog has been his obsession for the past couple of months. He named him "Barfy." I asked him what "Barfy" meant (because I don't think he's ever even heard the word "barf" let along know what it means) and he said, "That's just his name. He needed a name and that's what it is!" He gets that skill from his father.
Email Post
Labels: Bradley