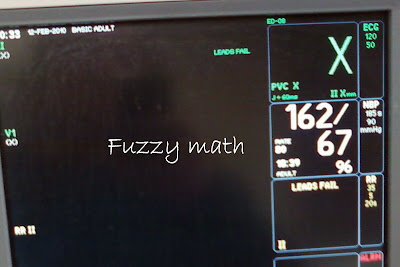 I only took two pictures today and both were with my cell phone camera at the hospital, where my mom spent her evening.

My sister called me around 4:30 and told me she thought Mom was having an allergic reaction - she was complaining of swelling so she was going to keep an eye on her and she gave her some Benedryl. I stopped at a friend's house on the way home from work so Bradley and I could pick up Chloe's boxes of Girl Scout Cookies. I heard my phone ringing, but ignored it so we could get the car loaded. When we were ready to go, I looked at my phone and my sister had called 9 times. I called her back and she said she was taking Mom to the emergency room because she had started complaining of chest pains and difficulty breathing. Her blood sugar had jumped from 91 to 195 in less than 20 minutes and her blood pressure was high. She gave her an aspirin and they were en route - and she left her kids at her house. I quickly picked Chloe up from extended day and dropped her and Bradley off with Mike and then left to go get Erin's kids. I got there quickly and took the three of them back to my house and started getting dinner ready for everyone when Erin called again.

My Mom had started slurring, drooling, and couldn't move anything on her left side. She stopped at the Missouri City Police/Fire headquarters and they called for transport. The fire fighters worked on her until the EMT pulled around from the back of the building and then they took over. They all thought she was having a stroke and took quick action and headed for the ER. Erin was on her way and told me I needed to come immediately. I told Mike what was going on, told Lexi to help with the kids, and rushed to the ER, too. It's about a 20 minute drive and it was crazy rush hour traffic through Sugar Land, but I got there in about 15 minutes. On the way there I got hold of my brother, Matt (who was at work), and told him what was going on. Meanwhile, Erin called her husband at his work and he was on his way to pick Matt up.

We all rendezvoused at the ER and just waited. They made us wait for over an hour before we were allowed to see her. It was incredibly stressful and frustrating because my Mom doesn't know all the meds and such she is on so we were worried that the doctors and nurses wouldn't have complete information. Once we were finally able to see her someone in scrubs came in and was very short with us and didn't introduce herself or anything. The blood they had drawn when my mom first arrived was still sitting on the counter. It turned out the rude woman was actually the attending MD. She insisted it was nothing to worry about - a reaction to her blood pressure medicine (something about ace inhibitors?). We had more questions and she just cut us off. She mentioned getting more tests, but they never did because the blood was still there. She also told us that my mom's blood pressure never got over 120. Oh. Okay. Check out the screen, lady. It's funny how it seemed that the hospital was going to run more tests until right about the point we told them she didn't have any insurance. Then everything was fine and we could just sign right on the line.

She released Mom with orders to stop taking her blood pressure medicine. Tonight Erin, Matt, and I will stay up watching her because her bp is already high. We'll try to get her another appointment on Monday. I have to go to bed - I am completely exhausted.
Email Post
Labels: family