Beauty and the Beast

Oh. My. Goodness. Some horrible, awful, terrible force has taken over my daughter. My friends keep telling me it's just a phase, but WOW. She has some attitude on her. Yesterday she was just intolerable! We were supposed to go to a birthday party for one of their little friends, but she was defiant and rude all morning long. She spent some quality time in Time Out, but it doesn't seem to change her behaviors.

I woke her up from her nap to get her ready for the party, and the attitude had just festered in her sleep. She refused to get ready, yelled, pouted, whined... It was just obnoxious. So, I told her that if her attitude didn't change she was not going to go to the party. She said she understood, and that she didn't want to go anyway. Then she hit me.

So, Little Miss was told that she was NOT going with Bradley to the party. She was fine with that until Bradley and I were actually walking out the door. She threw herself onto the tile and just wailed. I calmly explained that maybe next time she would remember that her actions have consequences and we would see her later.

Bradley had a wonderful time at the party! Here he is with the Birthday Boy, who turned 3 this week. Isn't it crazy that they are only 4 months apart? The kids bounced, ran, and thoroughly wore themselves out. I love birthday parties! :) 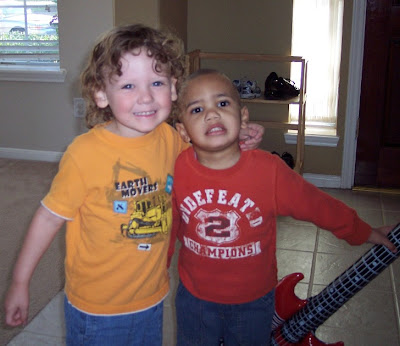 This is the card I made for the occasion. I pulled out a retired SU! set that I LOVE and use all the time for boys cards. It's called By Land and I wish it was still current. I used red acrylic paint on glossy white card stock so that the car would really shine. (It's hard to tell in this picture, though.) The base is Kraft, and I used Night of Navy and Old Olive for the layers. The chipboard "3" is from my big ol' box of chipboard - I have no idea where it's from. Basic Black ink and a couple of buttons from my craft supply added the last touches. Bradley thought it was "really cool," and so I hope the birthday boy loved it, too. (We left before the presents were opened.) I think I need to buy some more "boyish" stamp sets - I have a lot of fun making cards for boys. :) 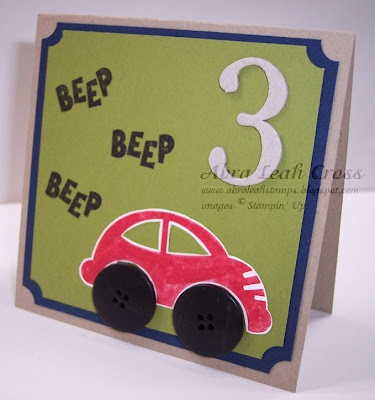 (PS: Today, BTW, Chloe has been simply charming all day long. Twice she mentioned that she will follow directions because she doesn't want to miss another party. Now I have to morph that into following directions because that is the right thing to do!)
Email Post
Labels: birthday family friends misc cards square cards

Elaine said…
Oy....kids can be tough sometimes, can't they? I hope she gets over her 'thing' soon. I think the card is adorable! Love the buttons as wheels! Hope you are doing well...