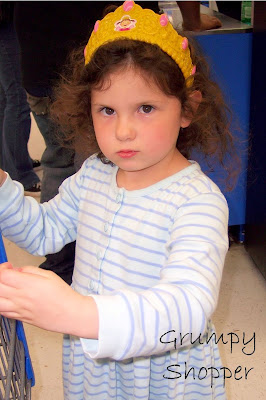 Had to get a couple of things from Wal-mart this afternoon so I brought the kids with me but boy was Chloe ever in a bad mood. Just one of those moments where she was not following directions, was making poor choices, and knew it - so she was being rude to her brother and to me.

I used to like taking pictures of the kids when they were crying as babies, not because I'm cruel, but because those big fat tears and huge mouths are just part of growing up. I don't ever want to relive the hell of colic, but I want the kids to see pictures of themselves even when they weren't prepped and prettied for photos. This picture is kind of like that. So when Chloe is dealing with her own hellion daughter, I can just pull this out and smile.
Email Post
Labels: Chloe