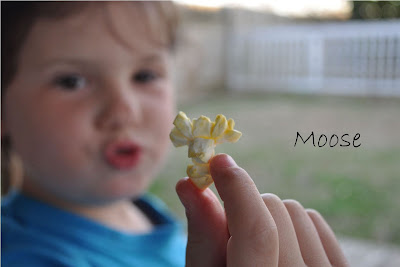 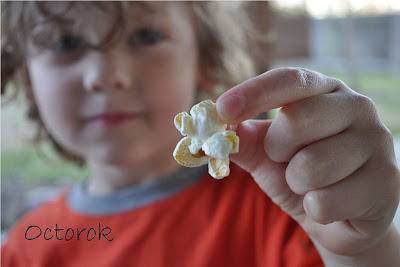 Today is Friday and the start of our Spring Break! We don't go back to school until March 22nd, so I hope we get a lot done and have a fantastic time off. This evening we had a picnic outside on the patio since it was so nice out (a bit chilly, but still pleasant) and Mike was working late. The kids each found a shape in their popcorn (like finding cloud animals, only edible).

Chloe was first - she found her Moose and made a big scene of marching the moose to his demise as he was gobbled up by the "moose-eating monster from Not Texas." (That's a scary place, you know.) Bradley really wanted to find an animal shape, too, but was not having much success. Then, he found this one and proclaimed that it was an Octopus - but I realized that he was only partially right. It's totally an Octorok! I bet you've never found an Octorok before, huh? (And no, I didn't know it's name but I knew it was that crazy little rock spitting thing from Zelda. Mike told me the name right away, though, when he saw the picture.)

I think our break is off to a great start!
Email Post
Labels: The Duo