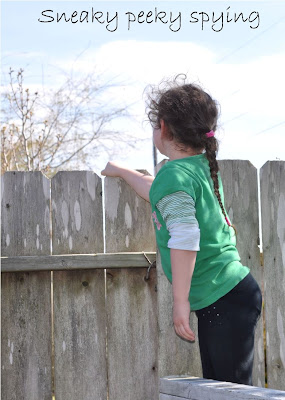 Our neighbor's grandson, who is Chloe's age, moved in with her a few months ago, but the kids haven't really seen him because it's been too darn cold to go outside. He has pretty severe autism, and she keeps him close to her at all times. When Chloe was playing with Zeke she heard him talking and she climbed the fence to see who it was. He saw her and ran over to the fence. He does quite a bit of echolalia and usually sing-songs to himself. But, when he saw Chloe he said, "Hi, Girl," very clearly. She climbed down and went to peak through a knot hole in the fence He stuck his finger through and she did the same. They linked their fingers and giggled for a while before he went off to play with his ball again like nothing had ever happened. I'm going to have to set up play dates for them this summer because I think he really needs to be around my kids. God had a plan when He sent him to live next door to us, I think. I can't wait to see how their friendship grows.
Email Post
Labels: Chloe friends