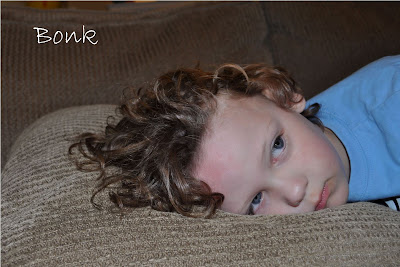 After dinner Mike and I were doing the dishes and the kids were running around playing. I turned and saw poor Bradley lunge forward and completely forget to put out his arms to stop his fall. His head hit the tile floor with a sickening "thud." I got to him in half a second and swooped him up to the couch while Mike got ice. We left the ice on for 15 minutes, let him rest for 5 minutes and put it back on for 15 minutes. This is what it looked like even after all that ice. He's got a fat knot and it's starting to bruise. He's pretty tough, though. He only cried for a couple of minutes and then he was still - watching Gabba while I held the ice on the bump. Poor little man, he says he has a headache and I don't doubt it! Hopefully it won't be so bad tomorrow. He said I could call him "Rhino Boy," so I guess he's comfortable with the new addition to his features.
Email Post
Labels: Bradley