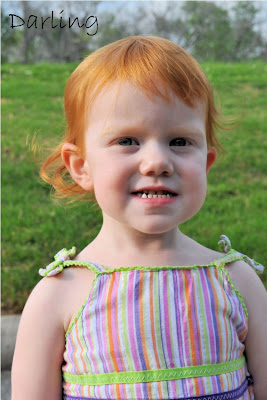 Isn't she the cutest little red-headed baby ever? Alyssa will be three in August and she is a complete doll. Like her mama and Titi she talks constantly and says the most hilarious things. The other day she announced, "Well, I died." When my sister asked her what she meant she said, "We played the game and I died. " My sister let her know that she was, indeed, still breathing and alive and Alyssa exclaimed, "I'm alive? ALIVE!!!! I like to be alive."

(That dress, by the way, was Chloe's when she was four!)
Email Post
Labels: family