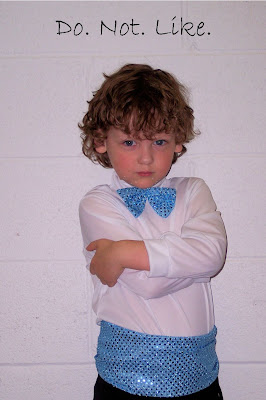 When we got Bradley's recital costumes last week he let me know right away that he did not approve of the sparkle and shimmer. In fact, he threw them on the ground and declared he would NOT be wearing them. So, I had to bribe use positive reinforcement to get him to wear them. I was prepared to offer a cool (but $20) remote control race car he had expressed interest in a few weeks ago, but then he said he would only wear the horrible costumes if I bought him a bubble gun. Yep, a $3.50 bubble gun from Target. Woot!

I told him he had to wear the costumes only 4 times: once to try them on, once for pictures, once for dress rehearsal, and once for recital. Today was picture day. Let me tell you, the pictures are stinking precious! (You can see all of the proofs HERE or by checking out my photos on FB.)

Since he's the only boy, all the moms of the girls in his groups wanted to take his picture with their daughters. It was just adorable, and he finally started smiling towards the end (after the hundredth person had proclaimed his cuteness). I can't wait for recital!
Email Post
Labels: Bradley