Bradley loves to go fishing. We took the kids fishing for the first time last October and they had a blast. Since then Bradley asks to go several times a week, but we just haven't had the time. Today my brother, Matt, and Mike decided to take the kids out for a couple of hours of fishing fun.

We live in a pretty large master planned community with a ton of lakes, creeks, ponds, and streams. We even have access to a major river system! But, the kids are content with a little lake that connects to the bigger river by way of some calm streams. :)

Within the first 10 minutes of casting off, Chloe saw a splash and then her pole got "heavy." The guys had to help her reel it in - but she pulled it up out of the water herself. My brother got it off the hook and Chloe tried to hold it, but it was too wiggly. She told me, "I pet him and he wagged his tail." Mike let him go and he swam quickly away from Chloe, who wanted to keep him in a bowl. 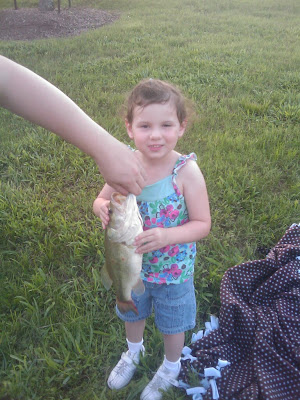 Bradley then commandeered her pole since it had the magic fish-catching power. But, Chloe's was the only catch of the day. Since I wasn't with them this was the only picture Mike took - but I'm sure we'll be out there more often this summer!
Email Post
Labels: family

Imagine That Digistamp said…
:) That's awesome!! That's really huge compared to the little tiny fish that my kids caught! Good for Chloe!! You're are going to scrapbook that right? lol