A couple of weeks ago I grabbed a t-shirt from my closet and when I put it on I actually gasped and said out loud, "Good God, what is that smell?" I quickly realized it was me and I had a moment of panic, but then realized it wasn't really me - it was just the t-shirt. I jumped right back to freaking out, though, because seriously why did my t-shirt freaking smell like funk? Yucky footy dirty feetsy funk. Because I am pretty bright I deduced that my t-shirt had the horrific aroma of Man Foot because it had been hanging right next to the shelf upon which my husband puts his shoes. Stank. Contagious stank. {seriously, UGH}
After I overreacted and washed all my clothes within a few yards of his shoes, I set to the task of dealing with the source of the problem. Boys are so gross, but I can't do anything about that. Which left the shoes. Now, I know Man Foot is nasty, so I've bought all those fancy inserts and gels and such for my husband's shoes. He's gellin' but he's still smellin'.
I tried bacteria-eating, odor-fighting powder, but my husband didn't exactly like the poofs of smoke when he walked (or the fact that all his socks had a cloudy tint to them). I tried good ol' baking soda, but same issues with the powder. Then, when I was doing laundry (where I spend a lot of time now that it is so darn cute in my laundry room) I got an idea - I stuck fabric softener sheets in each of his shoes.
Guess what? It totally worked!! He just takes them out in the morning and sticks them back in at the end of the day. His shoes no longer stink, which has stopped my clothes from stinking, which has stopped me from stinking. And that, my friends, is sweet. 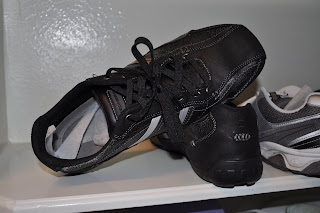