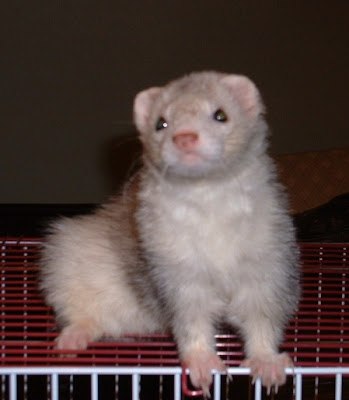 Gypsy came into our house as a very frisky 9 month old ferret in the fall of 1999. I bought her for Mike because he had always wanted a small furry friend - he wanted her to ride on his shoulder, do tricks, and live forever.
Ferrets are considered an "exotic" pet and they are not exactly easy to care for. They need to bathed often (even when "descented," they still have some powerful oil glands!), played with daily, cage cleaned daily, and they need a LOT of attention. Ferrets usually live around 6-7 years when properly cared for, though some live for much longer.
Most ferrets are not well cared for - because of their frisky and curious nature if not well attended they can become aggressive and not at all friendly. Gypsy was spoiled. SPOILED. She got new toys all the time, and even had her own stocking from Santa! She was litter box trained and would come when called. She never bit (not even snapped at) anyone - she would even play with our Great Dane when we had him!

She adored Chloe from the start, and tolerated every tail tug and powerful hug. She sat in doll strollers and play carts and was content being wheeled around the house. She REALLY loved sharing snacks any chance she got. 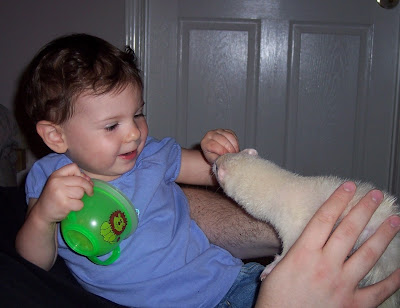 Several months ago Gypsy fell ill. She had never been sick, and had never had to visit the vet. So, this was our chance to learn that as an exotic pet, she had to go see the special Exotic Pet Vet. Located conveniently 20 miles away in the Galleria area (re: Glitz, Glamour, and no expense spared for your precious, precious fuzzy!). Gypsy went in on a Saturday night and spent 5 days and 4 nights with designer care. Mike thought that $900 wasn't really that bad for all of her care and treatment combined with the fact that we had her so many years and she had never once been sick. 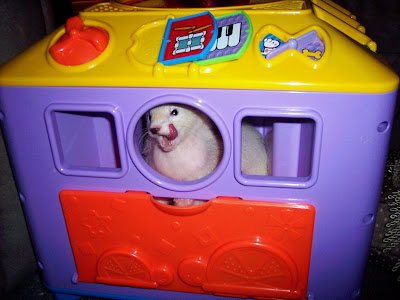 Diagnosis: insolinoma. Kind of like diabetes in ferrets. She was put on medication twice a day, which was only $35 per month. For ferret medicine.

She was doing much better, until right after Ike. We had some problems because her medication needs to be refrigerated, and then she ran out and she missed a couple of days of meds. And she is nearly 10 year old, so she was quite past the normal life expectancy for ferrets. Regardless, she started acting oddly over the week.

Then, on Tuesday she started seizing. My brother just happened to be at my house at the time, and he tried to keep her safe while he got hold of the vet, me, and Mike. Gypsy seized for over an hour before finally calming down - the vet told my brother to give her syrup - he had to bring her sugar up. But, the poor thing just never recovered.

I got home from and Mike and I had to make a decision. Gypsy continued to have small seizures, and we just knew she wasn't going to be herself again. Mike asked about another hospital stay, and, well, as much as I love small furry rodent... THAT was not going to happen again!!!

We called a local vet who was able to handle the procedure that night. So, I pulled Chloe aside to talk to her - I wanted her to be able to say good-bye. I explained that Gypsy was very, very sick and Daddy was going to take her to the vet. I then took a deep breath and told her that Gypsy was going to die. Chloe was stunned - she just stared at me before she started crying and saying, "But I don't want her to die!" I had originally wanted to avoid the whole "all ferrets go to heaven" bit, but....

Me: Chloe, Gypsy is very very sick and very old - she is almost 10 years old!
Chloe: 10? Like Sissy?????
Me: Oh, see, no. Gypsy is almost 100 years old for a ferret!
Chloe: But, I don't want her to die. She'll be all alone in the dark!
Me: No, she's going to go to heaven! Remember, when you die you go to heaven? Gypsy will go to Ferret Heaven!
Chloe: But heaven is really bit and she'll get lost!
Me: No, there is a really big cage with all her ferret friends.
Chloe: Will Jesus take care of her?
Me: Um. Yeah! There are angels who help take care of sick animals. God loves animals - remember how he said in the Bible that he watches over the sparrows?
Chloe: But is Jesus in her heart?
Me: Daddy has to take Gypsy now.... (!) You need to tell her good-bye.

Chloe hugged her close, and kissed her. I had Bradley come in to say good-bye, though he really didn't understand the situation. Chloe informed him that Gypsy was going to die and go to heaven, "And that is FOREVER!!!" she screamed.

Needless to say, we were all a bit traumatized. Chloe cried all night (she was awake until nearly 11pm, when she is usually asleep by 7:30!) and the next day she carried a picture of Gypsy with her all day at school. Today things are a bit better, but during our night time story we were looking at a picture book about a family that buys a kitten from a shelter - the book follows a year in the kitties life. I got to the part where I say, "Oh, look, they are going to get a baby kitty!" To which my daughter glowered, "And they are going to love it, but then it is going to grow up, get sick, shake her back, and die. Forever." So I don't think we are quite healing yet.

I think, though, that she is ready for more responsibility with a pet of her own. I am thinking of getting her a fish for Christmas, so she can get used to daily feeding. And then we will look at getting a puppy at the end of the school year so I can have all next summer to train her.

Chloe has informed me that her "heart is too broken to have another ferret. Ever."

And although I'm sad about Gypsy, my heart is too broken that my baby girl is hurting and I can't do anything about it.

Elaine said…
Oh I am so sorry for the loss of your pet! I know that you did the right thing and you have a sweet little girl who will always remember your pet. I'll be thinking of you and saying a prayer for you and your family.

Imagine That Digistamp said…
Oh, gawsh...that made me cry. I read your whole story. Poor girl!! I guess that was a long time to have her and get really attached. My 8 year old had 2 bunnies die within a month after she got them and is now on her 3rd one. She's had this one for over a year though. Then one night she got hurt outside and forgot to shut her cage all the way and she was gone in the morning. We also have 2 cats who eat little bunnies and mice etc. We were sure she was gone and after 2 nights, she came out from under our front deck! Whew! I don't know what kind of trama that would've been. I remember though her crying after each tramatic event. Daddy burried her other 2 bunnies out back of the shop. She was okay after a day or two. I hope your DD gets over it soon. Our girls didn't really like fish (we got one given to them from a neighbor) that didn't last long. But hamsters live 2-3 years average and they have fun with them!! WAAAY less work than a puppy (been there, done that one too! Now she's an outdoor guard dog). Good luck!!
October 8, 2008 at 2:09 PM